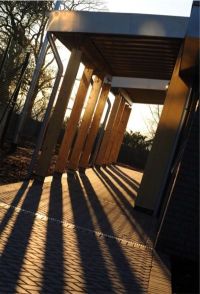 The contract for the execution has been awarded to Elesta’s System Partner Clarkson Controls, Worcestershire. The Elesta Controlesta RCO 720D-W BACnet enabled master controller controls both the natural ventilation (windows) and the underfloor heating system and is located in the boiler house control panel, which also offers control and monitoring to the boiler plant, pump sets and DHWS generator / pump via Controlesta RCO I/O modules.

Each of the classrooms has been fitted with Clarkson C² iCRU intelligent BACnet temperature and CO? sensors. As the iCRU is BACnet-MSTP capable they are linked together with a two core screened cable which in turn communicates with the Elesta RCO 720D-W controller. Information from the chosen items in the BACnet object list is passed to and from the sensor and act with the RCO control algorithms to produce within the sensor a 0/10v signal to operate the Clarkson C² iWAC window controller, within each classroom area.

To keep window actuator noise to a minimum, increase control-ability and reduce draft problems the iWAC controller modulates into four positions, 10%, 25% 45% and 100% of travel time of the 24V DC actuators.

Architect David Smith of GAJ UK Limited Chartered Architects commented ”To comply with UK building regulations, in particular BB101 we needed to supply natural ventilation to the classrooms. I was also concerned that we got the heating and ventilation automatically working together, using Elesta and the iCRU has provided this, together with timed manual override of the ventilation should the teacher require it.”

By using BACnet/ MSTP communications and having 0/10v outputs within the sensor, site wiring is kept to a minimum. And by using one set of sensor values, energy saving control interlocking within the software algorithms prevents heating and natural ventilation `crossover` of set points thus resulting in improved energy efficiency. Frost protection and optimum start is also afforded via the iCRU sensors.

As the RCO 720D-W system controller with integrated Web server is Web browser capable, and has been installed onto the school IT fibre optic network, the site services manager is able via his desk top computer and using a password, can for example change & read,- times / temperatures /CO2 levels / alarms /trend logs. Also the pupils, for study, will be able to not only view, their internal climate conditions, but also the outdoor ambient conditions for example — Wind speed, Rain, Solar lux levels, and Temperature levels.

The Headmaster also has access via his Web enabled Handi! — For when he needs his umbrella!