Luceco on the crest of “The Wave” in Coventry 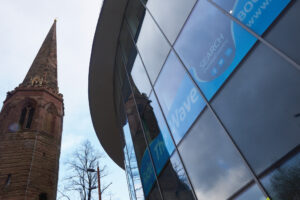 Luceco luminaires have recently been installed at a multi-million-pound water park, The Wave, Destination Water and Leisure Project (DWL) in Coventry.

At the centre of this state-of-the-art water park are six slides complemented by light and sound features, a splash pad with water jets, a lazy river, a poolside café, fitness and Mana spa suites and wave pool.

Over 200 Platinum Mini Downlighters from Luceco lit spaces including changing areas and WC facilities, locker rooms, corridors and circulation areas. Climate Extra, a robust LED IP65 rated luminaire offering an efficacy of 140 Llm/cW with increased performance for improved energy efficiency, was installed in the plant rooms and also on “wet” staircases including the staircases providing access to the attractions in the water park. Both single and twin fittings were installed, the opal diffuser enhancing the appearance and uniformity.

Celeste was installed on “dry” stairwells, Celeste is an attractive circular LED luminaire from Luceco featuring a ‘corona’ backlight effect with a direct / indirect light distribution.  Other luminaires included Academy, installed in store rooms and the communication hub and Luceco’s renowned 600 x 600 square recessed LuxPanel installed in the offices, medical area and staff room, with IP65 rated versions being used in the kitchens.

Front Five Building Services secured the contract for the mechanical and electrical works at DWL with Coventry City Council investing £36.7M. “The Wave” is proving to be a major attraction in the heart of the city centre of Coventry – the perfect legacy to their year as the European City of Sport.