Whilst wider technologies such as renewables and combined heat and power (CHP) have increased their share of the limelight over recent months, Pete Mills, Commercial Technical Operations Manager at Bosch Commercial & Industrial Heating explains why condensing boilers should still be considered a crucial part of the commercial heating mix: 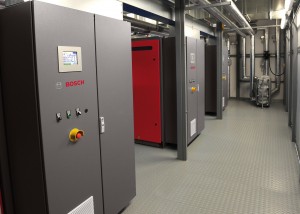 Recent years have seen a number of innovative new technologies enter the heating market as manufacturers look to cater for the needs of stakeholders keen to take advantage of government funded initiatives. Incentives such as the Renewable Heat Incentive (RHI) and the Carbon Reduction Commitment (CRC) have been put in place to reduce emissions and mitigate rising energy costs, which has been a prevalent issue since the big six energy companies hiked prices last autumn.

From an investor’s point of view, it is important to remember that a there is no magic bullet when it comes to the specification of a heating system for a commercial application. In most cases, a combination of technologies working in synergy is the best option, with condensing boilers offering cost effective stability alongside another technology.

Without doubt, the strength of a condensing boiler lies in its consistency of performance. A reliance on fossil fuel means that the condensing boiler can provide a constant supply of heat, which is not necessarily the case for renewable technologies. As a result, an alternative heat source is required to top-up that extra heat over the winter months when daylight hours reduce and the temperatures dip.

This case is typical where 100% of a building’s load is only required for a small minority of a yearly period – a week for example. In instances such as these, as there are few occasions where the building’s demand is very high, increasing the renewable system to cover peak demand of just a few days is not a cost effective or sound engineering solution.

Consequently, it makes sense to install a suitable back-up boiler which can easily handle peak load requirements. Condensing boilers are a good option thanks to a high turndown rate, which means they have particularly low working points. This means they are capable of operating for extended periods in a part-load condition, whereby their primary function is to offer support for the lead renewable technology.

Despite a reliance on fossil fuels, condensing boilers in general are highly efficient and have the added benefit of low emissions. The technology used by a condensing boiler is such that heat which would go to waste via flue gases in a conventional boiler is used to pre-heat the water entering the system to maximise efficiency.

Maximising the benefits of CHP

Typically, using boilers in support of another technology would be something associated with renewables. That said, combined heat and power offers an equally viable lead heat source for heating applications ranging from factories and retail units through to public facilities such as hospitals or sports centres. What CHP has in common with renewable technologies is that it is best used as a lead heat source, requiring some additional support during periods of peak demand.

Whilst the overarching capability of a CHP module is to enhance the cost effectiveness of the provision of heat and electricity, this does not mean to say that the technology should be considered a one-stop solution. CHP systems should be sized to meet the base heating load of a building, with a high efficiency boiler installed to help meet the peak load, during periods of particularly high demand.

By making use of the waste heat from the power generation process, CHP delivers energy utilisation of around 94%, which inevitably has a favourable impact on energy costs and emissions. With condensing boilers able to meet seasonal efficiency levels (L2B) of up to around 97%, the cumulative efficiency of a hybrid arrangement is further enhanced.

In this age of austerity, it’s not surprising that many businesses and investors are constantly considering ways in which to lower operational running costs. And when faced with rising fuel bills for the provision of heating and hot water, reviewing the capabilities of an existing system is a particularly good place to start.

For starters, it is important to check the actual demand of a building, as usage and design practice may well have changed since existing boilers were first installed. It is not uncommon to find instances where replacement boilers have been sized like-for-like to deliver the same output as the current boiler. However, this is not good practice and can ultimately eliminate the potential savings for the investor.

Today, most high performance condensing boilers need to be installed as part of a sealed system, and those that don’t still benefit greatly from being separated from an old system where the water quality may be difficult to control. For certain applications, conversion from an open vented to a sealed system can be tough to achieve with potential leaks from old pipework and fittings to consider, as well as the possibility of corrosion problems if the water from an old system is allowed to circulate freely around a brand new condensing boiler.

In situations like these, the most practical way of overcoming this kind of problem is to leave the existing system open vented whilst separating the boiler primary circuit using a stainless steel plate heat exchanger. Introducing a plate heat exchanger to the system ensures a safe and protected primary circuit for the new condensing boiler, whilst also ensuring there is no risk of system leaks from a higher sealed system pressure and eliminating any corrosion or restriction issues.

The most usual position for the plate heat exchanger is to replace the low loss header usually associated with modular boiler cascade systems. Fitting a low loss header allows the creation of a primary circuit, within which water velocity can be maintained at the required constant, regardless of changes or requirements in the secondary circuits. In cases where plate heat exchangers have been introduced, there is no longer a need for the low loss header as there is now no chance of the system pumps having influence over the boiler shunt pumps.

From the point of view of control, the plate heat exchanger functions in much the same way as a low loss header does. The system sensor is placed on the secondary flow, which compensates for any flow temperature loss across the plate heat exchanger (typically at 5°C). However, it is vital that the heat exchanger is correctly sized to ensure both the correct heat transfer and hydraulic resistance can be handled by the boiler and the system pumps.

Each installation of a new or replacement heating system should be considered on an individual basis to ensure the end-user’s needs are met. Whilst there is undoubtedly greater incentive than ever before for wider technologies to be adopted, condensing boilers continue to be the perfect partner for suitably sized heating alternatives.