Airedale International hits the marque with Made in Britain 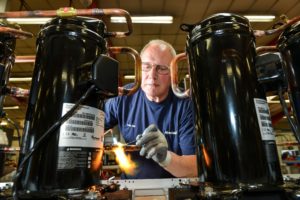 Airedale has been manufacturing high-efficiency cooling systems near Leeds since 1974 and is proud of its British engineered products, which fit with the vision of Made in Britain.

Made in Britain was founded in 2011 with the aim of helping everyone identify British-made products.

John Pearce, Chief Executive of Made in Britain, said: “We were delighted when Airedale applied to join the fast-growing Made in Britain community. Manufacturing and innovation in the thermal technology sector is well represented in our membership but Airedale’s work across commercial, industrial and the public sector means the Made in Britain marque will have an extended reach.”