What does new legislation hold in store? 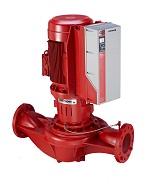 Kathryn Poke, Product Manager for Armstrong, explains what the EuP requirements will mean for specifiers of pumps for sites such as offices, schools and hospitals.

Talk across the industry during 2012 was dominated by the incoming European legislation and its requirements for domestic circulators. It should not be forgotten, however, that commercial scale HVAC pumps are also subject to new European legislation, within the same broad sweep of regulatory changes. As January 2013 sees the arrival of the next significant landmark in this process, it is perhaps timely to review what the incoming legislation will mean for those involved in specifying pumps for commercial scale HVAC installations.

The first point to make is that commercial scale pumps are rather better prepared for achieving compliance with the incoming legislation than their domestic circulator counterparts. In fact, if you have been designing and installing variable speed pumps with integrated inverters in variable flow applications, then you could be pleased to hear that your existing designs are possibly already compliant with the 2017 requirements.

Investment in R&D to improve sustainability of these larger scale pumps has put them in an ideal position to deliver the levels of efficiency now becoming mandatory. It may mean some rethinking of system design for some, with fixed speed systems facing particular challenges, but for many of us, the new requirements can be achieved with tried and tested variable speed pump technology.

The incoming requirements are outlined in two new pieces of legislation – both of which stem from the Energy Using Products (EuP) Directive. One focuses on pump hydraulic efficiency, whilst the other relates specifically to motor efficiency.

One set of requirements is documented in the new technical/scientific benchmark on pump efficiency which will come into effect in January 2013. A new European Commission EN standard has been proposed by the Europump on Energy Using Products (EuP) joint working group. Members of the working group included some of the leading European manufacturers and retailers of water pumps, and organisations such as Europump (European Association of Pump Manufacturers) and the BPMA (British Pump Manufacturers Association) provided input.

The new EN standard sets out a Minimum Efficiency Index or MEI for measuring the efficiency of water pumps, and outlines in detail the methodology for carrying out the relevant calculations. The index starts at 0.10 and goes up to 0.70. The higher the MEI, the better the efficiency and annual energy consumption for the pump size.  The 0.70 figure is the highest recognised efficiency (although products are not required to meet this in the foreseeable future). Deadlines have been set however by which all pumps within the scope of the legislation must meet a minimum MEI standard.

The first MEI figure that must be achieved by commercial scale water pumps is 0.10 by January 2013. The next important landmark is to achieve an MEI of 0.40 by 2015. This can be expected to take some of the less efficient pump models out of the market. The responsibility for achieving and proving compliance falls largely to pump manufacturers, with testing and validation from external organisations.

The second piece of legislation is designed to gradually increase standards of motor efficiency. This is the continuation of an existing process rather than the introduction of a new regulatory scheme. Back in 2011 the minimum motor efficiency requirement was raised to IE2. This is due to move to IE3 (or IE2 with a frequency inverter) in 2015 for motors 7.5kW to 375kW, and will be required for motors from 0.75kW to 7.5kW by 2017.

As already discussed, commercial scale pumps have been the focus for investment in product development for some time, and a great deal has already been achieved in terms of increased motor efficiency. Many of the variable speed pump installations, for example those involving Armstrong IVS pumps with integrated inverters, are already IE3 equivalent.

There is a caveat however. Just complying with the motor regulation doesn’t necessarily mean that you achieve all the pump efficiency requirements. The way in which a variable speed pump is controlled, and the design of the system, will have a significant impact on the efficiency of the pump in real terms and will directly influence the scale of the energy savings which can be achieved.

Having spent much of 2012 analysing our entire portfolio of pump models, we are now able to provide detailed advice on compliance of our product ranges. Armstrong customers who have installed the Armstrong IVS and IVS Sensorless ranges of pumps will no doubt be delighted to hear that these pump models (which incorporate integrated inverters) have been assessed as compliant with the 2017 requirements. This is due to their ability to automatically calculate motor speed in response to the demands placed upon them.

Perhaps the most important advantage of this is that specifiers will not have to go out on a limb and specify new, unproven pump technology in order to achieve compliance. System designers can continue to depend on these extremely popular pump models, with proven track records. Secondly, it means that specifiers who saw the benefits of Armstrong IVS technology in its early stages can reassure existing sites that their HVAC systems have proved future-proof to 2017 and beyond.

There are also, of course, new pump models under development. Armstrong is continuing to invest in R&D to make available new generations of technology for even higher levels of energy efficiency performance in the future.

Whilst the changes in regulations will cause a certain amount of inconvenience for pump specifiers, product selection might actually become easier in the future.

Along with the new efficiency requirements, the incoming EN standard includes guidelines for the information each manufacturer must supply (through product documentation and on its website) for each size of pump in each range. This includes, minimum efficiency index (MEI); year of manufacture; manufacturer’s name or trade mark, commercial registration number and place of manufacture, product’s model number, type and size and finally the hydraulic pump efficiency (%) with trimmed impeller.

A further ten pieces of data are to be available via the pump manufacturer’s website and the pump’s technical documentation.

It should therefore be a relatively simple process to identify pumps with the relevant levels of compliance as you design and specify the installation. As already mentioned however, energy efficiency performance relies on effective hydronic system design. A White Paper entitled ‘Conversion from Constant Flow System to Variable Flow’ is available for download from our website which includes further guidance on this subject.

Casella Supports Those Returning to Work With Environmental Hazard Monitoring…