Timeguard’s lead in LED for outdoor lighting seems unassailable with the introduction of a range of wide-beam floodlight designs that produce even diffused light, virtually indistinguishable from old-style and energy guzzling halogen lamps. This overcomes installers’ reluctance to switch to LEDs for floodlighting, because Timeguard has eliminated the disadvantages of other so-called LED floodlights which emit only the focussed beam of light that is the signature of light emitting diodes. 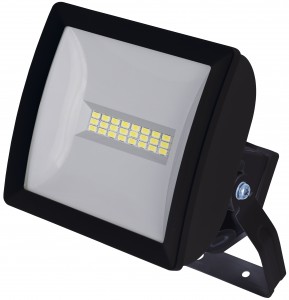 These new Timeguard lights join the NIGHTeye range which, as well as quality, unashamedly trades on its looks, the result of many months of development by Timeguard’s London-based design team.

Available in 10W, 20W and 30W versions, the new NIGHTeye Ultra range is equivalent in use to 135W, 180W and 250W halogen lamps and is offered with or without integrated PIR detectors for automatic switching. These new floodlights emit 685, 1260 and 2115 lumens of bright white light.

The wide angle is achieved through smarter lens design and precision design of a grid array of multiple diodes. The reflector back plate also enhances coverage.  The new range also benefits from Timeguard’s commitment to investing in superior componentry, with high quality drivers and PIR detectors that are rated to cope with the initial surge that accompanies LED switching.

The lives of the units, (which are in any case covered by the Timeguard three year guarantee), are further extended by highly effective cooling fins on the back.  It is a fallacy to say that LED lights do not emit heat in use – yes, they may be cooler than a halogen lamp, but they do emit enough heat progressively to degrade the LEDs and internal components. Heat build-up in the new Timeguard NIGHTeye Ultra range is prevented by the Timeguard cooling design.

Timeguard Managing Director Andy Douglas commented: “The bargain basement is no place for lamps that building occupiers are going to rely on for security and safety and which installers want to be able to fit and forget.”