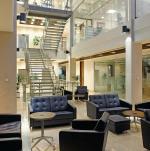 Zumtobel’s flush mounted Mellow Light IV luminaires have allowed a major financial institution to meet the Ceiling Brightness Impression (CBI) requirements of the LG7 CIBSE lighting code without having to use suspended luminaires.
The ceiling of any office space is always in the peripheral vision of the users of that space. If the lighting stands out against a dull background it can be very distracting, which is recognised in LG7. The simplest way to achieve a bright ceiling is to use suspended lighting, but this is not always possible or desirable.
The facilities team at St James’s Place Wealth Management wanted a very high level fit-out to match the expectations of their clients and had a clear idea on the type of lighting to use and where it should be installed. The base build lighting originally installed by the developer featured suspended luminaires in the offices and corridors, which achieved the requirements of LG7, but was not in keeping with St James’s vision.
An alternative approach to suspended lighting is to use the concept of Ceiling Brightness Impression (CBI) to assess the way the ceiling is perceived by people in the room. This takes into account the visual brightness of the individual fittings as contributors to the overall illuminated appearance on the ceiling.
Facilities specialists Wye Consultants were able to meet the CBI requirement by selecting Zumtobel’s Mellow Light fully-flush luminaires, with Grid Lens micro-pyramid glare controllers producing a combination of direct and indirect lighting with no glare.
Mark Lloyd of Wye Solutions comments: “The building was pre-let to St James’s Place, so we had the possibility of changing the base build lighting, but we still had to find an alternative that would comply with LG7 requirements.  We were able to show the developer that the Mellow Light met all its requirements. Around 400 units have now been installed in the building.”
Zumtobel’s luminaires have also been installed in various other areas of the headquarters building. In the double height lounge space style reception area, 2Light downlights help to create a welcoming atmosphere, while the central atrium features Vega column mounted direct/indirect luminaires and recessed ORILED units provide emergency lighting on the staircase to the lift lobby.
In the meeting suite comprising of three rooms that can be combined to provide a larger space, a Zumtobel Luxmate controller, linked to the AV system, allows the lighting in all the rooms to be controlled individually or as an entire room.