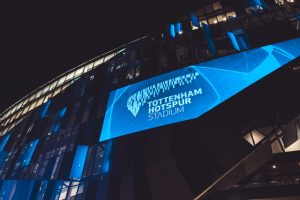 Launched in April, the Young Engineers Network has been set up to provide help and guidance for young people who want to progress in the building controls industry. It also provides an opportunity for them to showcase projects which they have been involved with and discuss the technical challenges which they face on the wide variety of activities they are working on.

At the latest event, 20 young engineers were given a tour of the world famous stadium, which was opened in April 2019 and has topped the Premier league sustainability table, produced by the UN-backed Sport Positive, for three years running. The delegates were also given a behind the scenes guide to the Plant and Control spaces, before enjoying a networking session with refreshments at The Corner Pin pub nearby.

Some of the delegates later explained the value of the Young Engineers Network and the useful experience they get from these events.

Josh Parkin, assistant building management systems engineer at Durham University, said: “I really enjoyed the event, it was amazing to see such a well-engineered building inside and out, seeing behind the scenes in the plant rooms as well as by the pitch side. It was my first time attending a BCIA Young Engineers Network event and I felt very welcome. It was a great way to meet and network with others in the industry – I would definitely recommend it to other young engineers.”

Bradley Mackfall of InTandem Systems commented: “I absolutely loved the experience of the tour, which had lots of great, innovative ideas of how the stadium was put together. The BCIA Young Engineers Network provides a fantastic way to meet people who are delivering similar projects. Unfortunately we do live in a world of screens that envelope our lives and our social interaction is left to text comms. These face-to-face events force some out of their comfort zone but with a common theme and it will be great to keep these going.”

Jen Vickers, who leads the Young Engineers Network, said: “It was fantastic to see another great turnout from our Young Engineers who enjoyed an informative behind the scenes look at one of the most iconic examples of modern architecture. The stadium tour was a great success and it was also excellent to see so many people asking questions of the team from Schneider Electric who were involved with the project and provided plenty of discussion among the delegates.”

Graeme Rees, BCIA President, added: “Environmental sustainability is such a vital part of modern sporting venues and they can provide some real inspiration for young people looking for a career in which they can play their own part in creating a carbon neutral future. Our Young Engineers’ recent outing will have provided a real eye opener for the exciting opportunities that potentially await them.”