Elta Fans has supplied five smoke extraction units for the £189m Library of Birmingham, which is said to be the largest public library in the United Kingdom – one of the largest in the world – and the largest public cultural space in Europe.  It is naturally viewed by Birmingham City Council as a flagship project for the city’s current redevelopment. 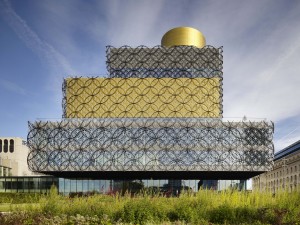 Cofely District Energy were appointed by Birmingham City Council to undertake the construction of the energy centre which serves both the library and the adjacent Birmingham Repertory Theatre to which the library connects and with which it shares some facilities. As part of this energy centre project, Environmental Climate Systems won the contract to supply and install smoke ventilation systems, including fire rated ductwork and louvers, selecting smoke extract fans from Elta which included two SmokeVent SLCS 560 and three larger SLCS 630 extraction units.

The fans are robust and durable axial units of heavy-duty construction, part of a range that has been specifically developed to operate as the extract part of the main ventilation system or for emergency clearance of hazardous smoke or fume conditions. They are capable of running in either normal mode or in a once only smoke operation at 300°C for a duration of two hours, making them a cost effective means of providing both everyday ventilation and emergency smoke clearance from the same unit.

The new main central public library in Birmingham is home to a collection of more than one million books and is situated on the west side of the city centre at Centenary Square.  It stands between Birmingham Repertory Theatre and Baskerville House, previously called the Civic Centre and formerly offices for parts of Birmingham City Council.  It has more than 200 public access computers, an exhibition gallery, music rooms, a studio theatre and a recording studio.  It replaces the former Birmingham Central Library.

Elta Fans’ SmokeVent SLCS fans have adjustable pitch aerofoil section impeller blades made from high quality die cast aluminium.  These are positively locked by pinning to provide added security for operation in dense smoke.  The highly efficient impellers make SmokeVent units a very economical way of moving large volumes of air at low to medium pressures.  By providing rapid smoke extraction, cooling and improved control of the resulting smoke in the event of a fire, the safe evacuation of occupants is made much easier.

The futuristic building, designed by Francine Houben of architects Mecanoo, was recently opened by Malala Yousafzai – the teenager from Pakistan who championed women’s rights and survived a Taliban assassination attempt.  On officially declaring the new library open and unveiling a commemorative plaque, she said: “Let us not forget that even one book, one pen, one teacher can change the world.”

The construction programme took over five years and, now open to the public, the library is forecast to attract some three million visitors a year.