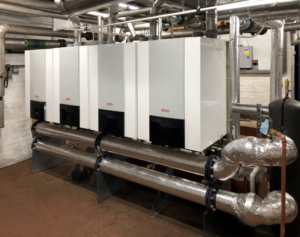 Staff and pupils at Dunsville Primary School in Doncaster are benefitting from highly efficient heating and hot water, thanks to four 120kW THISION® L EVO gas condensing boilers from ELCO. The new wall mounted boilers have been installed in-line on a floor standing cascade system within the school’s basement plant room.

The new THISION® L EVO boilers have replaced two ageing and inefficient coal-fired units, which have been in operation for decades. Since Dunsville Primary first opened its doors in 1952, it has evolved significantly, with the school now comprising 11 classes in Key Stage 1 and 2, as well as two nursery classes. As a result, the heating and hot water system required refurbishing, with the upgrade of the coal-fired units to modern gas condensing boilers representing a major reduction in running costs.

It is estimated that the old boilers were running at less than 50% efficiency, almost half the levels provided by the new gas-condensing THISION® L EVO boilers from ELCO, which are over 97% efficient. Furthermore, the new boilers significantly reduce harmful emissions, with NOx levels (nitrogen oxides) now less than 40mg/kWh, which already meet future class 6 regulations. 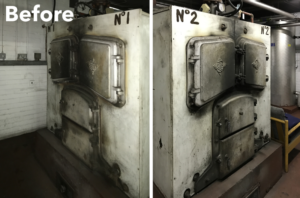 Mechanical and electrical contractors for the project were Essington-based Staffordshire Mechanical Solutions. Commenting on the project, Project Manager, Dave Seward, said: “It’s not often that we come across such old equipment, especially systems that are still running on coal! So, we recommended the upgrade to the gas-fired condensing units in order to provide the highest possible efficiencies, along with the backup of a cascade system.

“The location of the old boilers in a basement plant room also led the decision to specify wall mounted units. Doing so allowed us to easily transport the THISION® boilers into place and mount them on the cascade rig. Overall, we’ve been pleased with the installation and the after service from the ELCO team, especially our sales rep Brett Stokes, who always ensures our projects receive the best attention from start to finish.”

As part of the boiler upgrade, the THISION® L EVO units have been installed with a new combined flue system, as well as upgraded pumps and new BMS. These have combined to further maximise the efficiency and controllability of the school’s heating system.