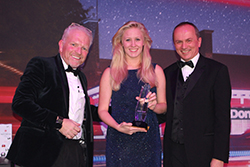 Amelia Flavell was recently awarded apprentice of the year at a recent McDonalds supplier event, which took place at the Metropole Hilton hotel in Birmingham.  Over 200 people attended the event and Amelia was one of three who were shortlisted for the award.

The young finance apprentice joined the company in September 2014 and quickly developed into main support for the finance manager. Amelia helped to develop key KPI’s such as weekly labour productivity, presentation of daily and monthly sales numbers that included the integration of the business in the UK.

Amelia has progressed exceptionally quickly since she started working for Nortek, beyond the usual expectations for an apprentice.  Karl Pearson, finance manager and Amelia’s line manager commented “The future looks very bright for Amelia she is halfway towards becoming a qualified accountant and in the next couple of years will become more involved in different areas of the business taking on more responsibility for ultimately being responsible for preparing financial statements for the business”.

Nortek invests heavily in its apprenticeship scheme and Amelia is one of four apprentices to have joined the company in the last two years.