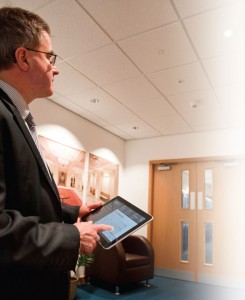 It’s not often that a truly new and innovative idea comes along but Harvard Engineering believe that they have something completely fresh to offer which might just shake up the indoor lighting control market for ever, making energy savings and carbon reductions more attainable. Andy Davies, Business Development Manager for indoor controls at Harvard, explains.

The decision to install lighting controls should be a no-brainer – 41% of all electricity consumption in commercial premises is spent on lighting and installing new lighting technologies, together with lighting controls, can result in savings of over 50%. Using lights only as and when needed has the added benefit of decreasing internal heat gains, so reducing the need for air conditioning and further contributing to energy savings.

Lighting is not only heavy on the pocket but also has a major impact on the environment. The amount of carbon dioxide produced globally from generating electricity for lighting is three times higher than the emissions produced by aviation.

Carbon dioxide is the largest of the trace gases and currently responsible for 60% of the ‘enhanced greenhouse effect’. Cutting carbon emissions will contribute to the government’s target of reducing the UK’s greenhouse gas emissions by 80% from the 1990 baseline by 2050 and save UK businesses millions in unnecessary electricity costs. It will also help companies to achieve green credits towards BREEAM certification and the Carbon Reduction Commitment (CRC) Energy Efficiency Scheme.

So why are lighting controls not being used as much as they could be? Figures show that of all the controllable lighting sold in Europe today, 75% is not currently being controlled by anything other than the on/off switch.

The clear answer is that fitting the current generation of control solutions into existing premises can be costly and disruptive. Occupancy sensors, time scheduling and using natural daylight where possible by employing photocell sensors to switch off or dim lights have been available for some time but have significant drawbacks, as do installing DALI and Analogue 1–10V dimming protocols. Configuring settings is complicated and usually requires the expensive services of a specialist engineer.

In 2005, Harvard launched an industry-changing system to control and manage street lamps. This multi award-winning technology, LeafNut, uses GPS and radio frequency to wirelessly control street lights via units which are fitted onto each lamp. This enables them to be controlled via a computer as individual lights or in groups – dimmed or switched to save energy. They can be retrofitted onto existing fittings or combined with new, energy saving LED lights for maximum benefits. The system also collects data on lamp status and gives daily reports on energy consumption to save on maintenance costs and put the user in control of energy expenditure.

LeafNut has been a huge UK manufacturing success story with over 100 installations completed in prestigious flagship projects worldwide, and the number of installations is continuing to grow. The market potential is enormous.

Harvard’s engineers considered how this revolutionary technology could be adapted to the indoor lighting control market and what new benefits it could bring. The result is a new concept in indoor lighting control which not only improves on existing technology but also offers capabilities never offered before by lighting controls. Christened EyeNut, it takes on some of the challenges presented in a sector where 80% of the buildings that will be in use in 2050 have already been built, and current systems can be expensive to install and difficult to commission.

EyeNut, like LeafNut, is free of wires and can be simply retrofitted into existing fittings.  Uniquely, it can be used to control not just individual or groups of lights in one building but in multiple buildings from a single hub. This opens up completely new opportunities for lighting management – whether in retail, commercial or industrial sites, in schools, colleges or hospitals.

EyeNut is wholly customisable, allowing the user to fully and precisely control individual lights or groups of lights at the press of a button on a computer, laptop or tablet. Installation doesn’t require the services of a specialist engineer and the system is capable of controlling 500 devices from one wireless gateway, compared to DALI’s 64. This can all be achieved via an intuitive, user-friendly dashboard or Graphic User Interface (GUI) to set up or change preferences. Users can create their own lighting groups, or control and manage schedules through the profiling feature.

The dashboard also has a mapping feature which gives the operator a clear and complete view of all light points set over an imported image of their building layout. This makes it easy to see energy heat spots and how much energy lights are consuming. EyeNut also shares LeafNut’s facility of a two-way flow of information so that well-informed decisions can be made on how to adapt lighting to meet sustainability targets using the energy reports and data output provided.

The system is also compatible with other control gear. Lights can work in parallel with photocell sensors so that they only come on at a level necessary to augment levels of natural daylight. Daylight is good for people; research indicates that increased daylight in patient rooms in hospitals, for instance, may ease post-surgical pain and reduce the length of hospital stay.

The system can also connect with passive infrared (PIR) detectors to switch lights on and off or dim them, depending on occupancy, integrate with existing building management systems to collect occupancy data and with fire-alarm systems so that lights respond to emergency situations.

Energy expenditure on lighting is something that we can already do something about and yet the drawbacks of existing technologies means that controls are not implemented as much as they could be. This new technology opens up new possibilities for optimising indoor lighting, thereby cutting energy bills and carbon emissions. Light is one of our greatest assets. Let us use it well.