The pioneering Kingston Heights project, which sees 137 apartments and a hotel get renewable heating and hot water from the River Thames, has received further recognition by securing the ‘Commercial Project of the Year’ award at the National ACR Awards 2015. 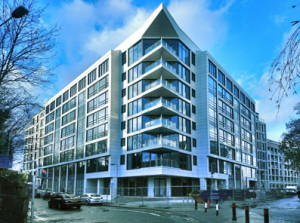 In announcing the success for the project, the judges commented that Kingston Heights was a “clear category winner”.

Developer Mike Spenser-Morris was on hand at the prestigious award ceremony held at Birmingham Town Hall on January 29th to collect the award, alongside Russell Jones of Mitsubishi Electric.

“We are delighted that this innovative project has been recognised once again and credit has to go to Mike for his determination to show how effective an open water heat pump system could be for community heating”, commented Russell Jones, PR and Communications Manager for the manufacturer.

Developed by NHP Leisure Developments in the heart of Kingston upon Thames, the £70 million, mixed-use development harvests renewable, low grade heat from the Thames and transfers it 200 metres from the river to the apartments, 142 bed hotel and conference centre where it is utilised to provide all the development’s heating, hot water and cooling requirements.

Here Mitsubishi Electric’s advanced heat pump technology boosts the river water’s low grade heat provided by the solar energy naturally stored in the river (and every open body of water) to the temperature required to provide all the heating and hot water for the flats and the hotel (as well as providing its cooling requirements too).

The adoption of this system enables the production of up to 2.3 megawatts of thermal energy whilst producing Zero Carbon emissions on site and outstanding energy efficiency with projected Coefficients of Performance of 4-6+. Electricity required to run the system is provided by Ecotricity’s wind turbines, making the entire installation Zero Carbon – saving in excess of 500 tonnes of carbon that would have been emitted by the combustion-based system.

The development has also been used as the inspiration behind an open water heat pump map developed by the Department of Energy and Climate Change (DECC), under the direction of Edward Davey MP, Secretary of State for Energy and Climate Change and MP for Kingston and Surbiton, who formally opened the scheme in October 2013. The full map can be viewed at: https://www.gov.uk/government/publications/water-source-heat-map.