ICOM Energy Association members and guests gathered at the RAF Club in London for the annual lunch, bringing together over 100 of the commercial and industrial heating sector’s key decision makers.

Highlights of the event, which was sponsored by Bosch and Nortek, included a fascinating overview of global energy markets by BBC Science Editor David Shukman and the presentation of the third ICOM Apprentice of the Year award.

Proceedings were opened by honorary life member Phil Brompton, who introduced the Association’s new chairman Simon Parker. In response, Mr Parker welcomed the recent growth in the commercial boiler, warm air and radiant markets though he was less sanguine about the renewable energy sector. The government’s modifications to the Renewable Heat Incentive, he suggested, will have serious implications for biomass and solar thermal potential – whilst on a more positive note flagging up the opportunities for green gases, CHP and heat pumps.

He also made reference to the hard work by ICOM members on implementing the latest ErP regulations with a warning that there is still a lot more to come. The Gas Appliance Regulations in particular were cited as having a significant impact on members.

In this respect, Mr Parker noted how the growing ICOM membership, covering market sectors that have not been included before, is giving the organisation a more holistic approach to the industry that will stand it in good stead for meeting future challenges.

Guest speaker David Shukman also made energy the theme of his address, with a focus on the relationship between public policy pronouncements and reality, using the Paris Agreement 2015 – and its commitment to reducing global temperatures by 2°C – as an example. Whilst many governments are reluctant to invest in mitigating climate change, he noted that progress will be reviewed every five years and politicians do not like to be embarrassed by unachieved targets.

In this respect, Mr Shukman observed that public pressure can also be effective in other ways. For instance, there is now considerable social pressure in China around the issue of air quality and this is helping to shift emphasis away from coal to wind farms and solar. This has a knock-on effect for the rest of the world as it is serving to drive down the cost of turbines and solar panels – helping to bring us closer to the key target of making renewables cheaper than fossil fuels.

Corporate engagement was also cited as another key driver in tackling climate change, with a number of big companies committing to carbon neutrality as part of their overall corporate social responsibility.

Nevertheless, he warned, switching to renewables must be seen as a long-term objective because of our continued dependence on liquid fossil fuels – especially for transportation. He noted that it took around two centuries for the internal combustion engine to become dominant over steam.

Speaking on behalf of the guests, David Kilpatrick, Director of the Combustion Engineering Association (CEA), explained to the audience how ICOM and the CEA are now working closely together in a number of areas, including the publication of guidance documents.

By way of illustration, he observed that around 90% of incidents involving boilers or burners were due to poor water treatment, so that a key focus for the two Associations has been the development of a new water treatment best practice guide, designated BG04. Due for publication in July 2016, this is designed to be a simple guide for people who are not engineers but have responsibility for managing or maintaining boiler plant.

Apprentice of the Year

The proceedings were concluded with a presentation of the Apprentice of the Year Award, which this year went to Andrew Bell of Cochran; with Kyle Dean of Lochinvar and Phillip Roberts of Nortek Global (HVAC) as runners-up.

ICOM Director Ross Anderson spoke eloquently about the importance of apprenticeships in replacing the skills of those older people in the industry who are close to retirement. He was particularly pleased that so many ICOM members employ apprentices, noting that this puts the industry in a strong position to encourage more emphasis on engineering by the skills councils. 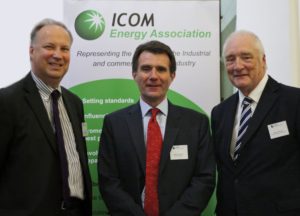