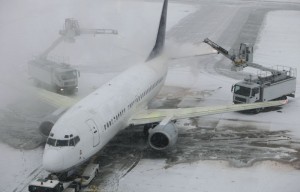 Heathrow has found a new way to store and treat its storm water, naturally and through the use of Forced Bed Aeration (FBA), innovative aerated reed beds are delivering a dramatic increase in the airport’s treatment capacity. Tori Sellers of ARM Group Ltd (ARM) explains more.

To avoid closures and travel delays as well as support flight safety and schedule continuity, many airports are having to deal with the impact of a surge in the use of deicing fluids on aircraft to cope with increasingly severe winter conditions.

Heathrow is one of the busiest airports in the world so deicers play a key role in its winter operation plans. Arctic environments are consistent in their harsh weather pattern whereas London’s varies wildly.  In the winter of 2012/13, 25 events were forecast but only five delivered heavy snowfall.  These unpredictable weather patterns make it difficult to manage biomass which is a critical success factor in natural treatment processes. 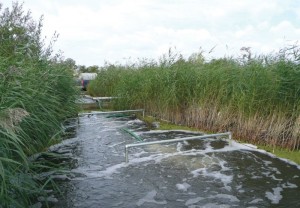 Heathrow’s Mayfield Farm treatment plant was built in 2001 to store and treat the run-off from the southern catchment of the airport. It comprised 36,000m3 of storage; a primary reservoir, a floating reed bed section, a balancing lagoon and twelve reed beds, each 0.5m deep.

After evaluation of the treatment efficiency, it was determined that the plant struggled to cope with the challenge of harsher winters in maintaining optimal output and discharge compliance.

Heathrow needed to upgrade its existing treatment system because it was designed to treat much lower contaminant loads based on data from the 1990s. The natural treatment system needed to be improved to attenuate and treat the flow of storm water before discharging in to the local watercourse. 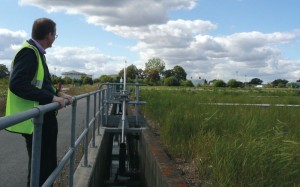 The original treatment wetlands using anaerobic processes were designed to remove deicers containing glycols with a design loading rate of 590kg COD/d. The winter of 2009-10 trials revealed they were actually dealing with a load of 1,900Kg COD/d which was triple the original design load.

Run-off containing deicers is nutrient-poor which resulted in a low microbial count in the system which meant it was struggling to maintain treatment performance. Oxygen and nutrient availability were the major limiting factors.  The increased use of deicer had overloaded the system reducing its treatment capability resulting in effluent having to be tankered off-site for treatment.

We knew we could retro-fit the solution into the existing infrastructure at a fraction of the cost of replacing the entire system and this would provide oxygen-rich conditions which degrade glycols and acetates more quickly.

Results from Buffalo Airport in New York and its $9 million, full-scale, airport wastewater treatment system showed impressive removal rates using FBA.  Although it was located by the runway, the risk of bird strike was minimised because it had been planted with grass so there were no areas of open water.

The results from Buffalo Airport’s wetland – which was a proving ground for deicer treatment using FBA were therefore used to optimise Mayfield.

ARM Group planned to use Heathrow’s entire existing infrastructure at the Mayfield Farm Treatment Works and upgrade the system of lagoons and wetlands with aeration and nutrient addition to ensure that oxygen and nutrients are no longer treatment limiting factors.   The team targeted removing a minimum of 3,500kg of BOD (Biochemical Oxygen Demand) per day.

Trials showed a ten-fold increase in COD removal using FBA against the airport’s passive treatment facilities. By ‘tuning’ an aerated system, we optimise both energy consumption and oxygen transfer rates so you can cope with harsh winter, fluctuations in volumes and concentrations of contaminated wastewater.

Heathrow results show a fourteen-fold improvement in its removal rates since using FBA which has been tested by harsh winters (see figure 1). Natural wastewater treatment systems need nutrient and bacteria levels to be managed to ensure there is enough biomass to treat the contaminants. At Mayfield Farm, we’ve installed online instrumentation which controls both the various treatment processes and storage so that they work together as a whole.

We cope with swinging fluctuations in climate and treatment demands by making minor adjustments.  That means minimal time demanded from airfield operations staff.

Heathrow has managed to cut both its construction and long term running costs by upgrading its existing constructed wetland to the FBA standard while staying in the footprint of the original facility.  It’s also boosted its biodiversity action plan and maintained habitats for insects, birds and bats by planting 80,000 reeds on which they feed.

By installing a SCADA system, Heathrow’s in-house team find it easy to remotely monitor and control the system’s performance. In addition we have also created headroom to cater for future climate fluctuations.

There’s only so much rigorous analysis and planning you can do when working with nature so it’s gratifying to see the dramatic results of the trials come true in the full-scale project.

Heathrow’s environmental operations manager, Russell Knight, says: “We’re delighted this upgrade has improved treatment performance by a factor of fourteen.  It’s a huge step forward in getting the most out of this innovative solution.  This facility allows us to continue fulfilling our commitments to running Heathrow responsibly and efficiently.”