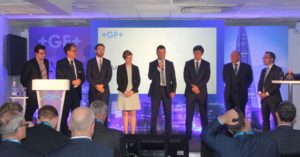 One of Europe’s biggest manufacturers of pipework and fittings for building services staged an event in London to unveil an enhanced offering to the industry, as well as to underline its confidence in the UK construction industry.

George Fischer took over the Altitude 3600 venue on the 29th Floor of the Millbank Tower for the day to offer its key customers, specifiers and the construction press a panoramic view of London’s skyline – to emphasise the scale of high-rise developments planned not just for the Capital, but also the UK’s other cities such as Manchester and Liverpool.

The Anglo-Swiss specialist fielded a heavyweight team of its top management and key technical people – introduced by television presenter, Chris Clarkson – to offer multiple insights into the company’s business strategy as well as its enhanced product ranges.

Richard Trevaskis, George Fischer’s MD & Head of Northern Europe gave an overview of the Big in the City concept and the company’s ambitions for growth. Centre stage, however, was the manufacturer’s prefabrication service for pipe systems intended to simplify the installation of chilled water and other essential pipework within the new generation of skyscrapers, set to house the UK’s booming population as well as the businesses where they will work or spend their leisure time.

Other highlights included the launch of GF’s new COOL-FIT 2.0 fully pre-insulated piping system and the  new City Range of slim-line heat interface units or HIUs, which are ideal for the final delivery of heating and domestic hot water in multiple occupancy properties like tower blocks.

Mike Reader from Constructing Excellence also offered his perspective on the state of the industry and the opportunities available to the big players in the market.