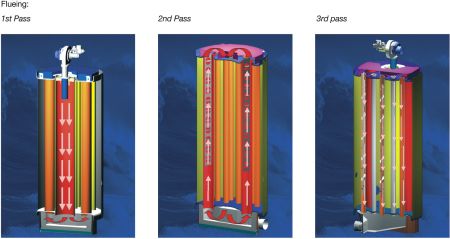 The growing level of interest in low carbon and renewable technologies is increasing pressure on the UK building services industry to deliver heating and hot water systems with higher efficiencies and lower carbon footprint. In the commercial sector, in order to secure planning permissions and to achieve high BREEAM (BRE Environmental Assessment Methodology) ratings for newbuild properties, it is predominantly technologies such as solar thermal, ground source and air source heat pump solutions that are being considered and applied.

However, a large number of commercial buildings that currently exist in the UK will be present on the landscape for many years to come. In the commercial H&V sector, we are still experiencing what has always been referred to as the 80/20 rule. That is, 80% of the projects on which our equipment is being used are existing properties and 20% are new-build.

It could be argued that, with the slow down in the development of new commercial property, the balance is swaying even more towards existing buildings.

With space heating in existing properties there are no huge system energy efficiency gains to be achieved through the application of condensing boilers, unless the downstream heat emitters are changed. Exhaust gas condensing occurs when the heating system temperature is below the dew point of the gas i.e. around 55ºC. With the vast majority of low temperature wet heating systems operating with water flow and return temperatures of typically 82ºC and 71ºC respectively, the commercial boiler will not be operating anywhere near the temperature where condensing can occur.

This could only be achieved through replacing the heat emitters with larger surface area radiators to ensure sufficient space heating is being provided to occupants at the lower operating temperatures. Budget constraints may prevent such changes from being made on refurbishment and retrofit projects, where focus tends to be on plant room equipment. Some efficiency gain will undoubtedly be achieved through the use of newer plant, but performance would not be optimised to achieve the lowest possible heating fuel consumption and the subsequent reduction in carbon emissions.

The story is somewhat different for hot water generation. The traditional method of generating hot water in commercial buildings is through the use of a hot water storage calorifier served either by a single or number of commercial boilers, usually via a low loss header. Such calorifers are designed to store hot water at around 60ºC in order to ensure the risk of legionella is mitigated. Hot water should also be distributed through the hot water system beyond the calorifier and within the secondary return circuit at a temperature of at least 55ºC to prevent the development of legionella within the pipework. Point of use mixing valves would be used at the hot water outlets to reduce the discharge temperatures to below the temperatures at which scalding can occur. In order to achieve a stored water temperature of 60ºC the boiler circuit feeding the indirect coil within the calorifier needs to be operating at say 80ºC flow and 70ºC return temperatures. At such temperatures the boiler will not be operating in condensing mode. If hot water is the dominant load within the commercial building then it is likely that for the majority of its operating cycle the boiler will not be operating at its optimum performance. Even new commercial boilers may be operating at efficiencies of between 70% and 80% during hot water generation periods.

Hot water storage calorifiers are typically designed with indirect coils which deliver a recovery rate of one hour through a temperature rise of 50ºC (10ºC water inlet and 60ºC water outlet temperatures). For large commercial premises with high peak period hot water demands, this could lead to large quantities of stored water being required.

More storage on site presents a greater risk for legionella development and also higher cylinder heat losses depending on the type (e.g. polystyrene or polyurethane) and thickness of cylinder insulation. Cylinder heat loss and the type of insulation have an impact on the Global Warming Potential (GWP) and Ozone Depletion Potential (ODP) of the system.

For many years, separation of the heating and hot water loads has been recognised as the most energy efficient way of delivering these services in commercial, public and industrial buildings. Whilst the principle was first introduced when direct gas-fired storage water heaters came onto the UK market some 30 years ago, it proved just as effective when instantaneous or constant flow type appliances became an option for larger load and higher peak demand applications such as large hotels and leisure complexes.

Initially, the concept of system separation and the use of high recovery direct-fired gas water heaters found favour with building services engineers. This was because efficiency was improved and reduced stored water volumes required a smaller sized plant room. This is especially true if the hot water generation system is decentralised with units installed close to the point of use. Less storage leads to reduced risk of the development of legionella bacteria which is certainly of great interest and importance to public health engineers.

Over the last five years the industry has witnessed the introduction of direct-fired condensing storage water heaters. These offer the benefits of using direct-fired water heaters as outlined but with the advantage of delivering exceptionally high fuel efficiencies. For instance, if the MAXXflo product from Andrews Water Heaters is considered, then this has a fuel efficiency of around 98% (gross calorific value of natural gas). This efficiency is significantly higher than the level that can be achieved through the use of a heating boiler(s) and calorifier which in turn has a substantial impact on the carbon footprint.

Cutting fuel consumption in this way both reduces associated carbon emissions and saves on fuel costs. In addition, as there is a condensing direct-fired water heaters category in the Carbon Trust’s Energy Technology List (RTL), private sector end users would be eligible to claim Enhanced Capital Allowances against the capital goods in which they have invested.

Whilst there may be issues when integrating condensing boilers into existing heating systems that are unable to operate in condensing mode, this would not be the case with direct-fired condensing water heaters. Whether the heater is of the standard efficiency, noncondensing type, or a high efficiency condensing model, the water inlet temperature is the same, i.e. typically 12ºC in warmer spring and summer months and 8ºC in winter (an average of, say, 10ºC over the four seasons).

The condensing of flue gases and the greater transfer of heat from combusted fuel into the potable hot water circuit is achieved through multi-flue gas passes within the water chamber (see figure 1). Depending on heater design, it can also be a function of whether the gas burner is of the pre-mix type and where the cold water inlet and secondary return connections are made into the stored water.

Hot water separation, with boilers providing purely space heating and direct-fired water heaters generating hot water, also lends itself well to the integration of renewable technologies such as solar thermal and air source heat pumps. Both could be used to pre-heat the cold water inlet to the direct-fired water heaters to reduce the fuel required to raise the stored water to the desired set-point temperature. Whether existing or new-build commercial
property, if hot water is the dominant load then it would seem logical to focus energy efficient appliances and LZC solutions on this aspect of the mechanical services.

There is a vast number of existing commercial buildings in the UK that are currently using hot water storage calorifiers and standard efficiency (typically 74% to 78%) direct-fired water heaters. All such properties would benefit from the retrofitting of high efficiency condensing water heaters, from environmental, energy and cost saving perspectives. The installation process would be relatively straight forward, with no requirement for changes to the system downstream of the primary hot water generation plant.

With the introduction of the Carbon Reduction Commitment (CRC) in April of this year, there has never been a better or more appropriate time for commercial property owners and operators to consider upgrading their standard efficiency water heaters to condensing models. Reducing carbon emissions in this way also supports the UK Government’s target of achieving a 20% reduction in CO2 emissions by 2020. The EU is pressing hard for this value to be increased to 30%. Whichever figure is considered, the UK industry is not going to achieve the target by only taking into account new build properties. Let’s not forget existing buildings and the impact that improving the efficiency of their systems would have on the UK’s carbon footprint.