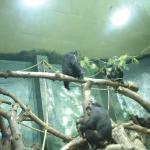 Set in North Wales high above Colwyn Bay, the Welsh Mountain Zoo is proud of its reputation as a caring conservation zoo. It is home to many rare and endangered species from Britain and around the world, including Snow Leopards, Chimpanzees, Red Pandas and Sumatran Tigers.
When the zoo decided to refurbish its Chimpanzee House, Zoological Director Nick Jackson insisted that natural daylight should be a priority to replace the time-switch controlled electric lighting that the zoo had been dependant on in the past.
The dual-function Chimpanzee House, which was built in 1990 to provide shelter for the animals in a bad weather, consists of a hall for the chimps and a 100-seat auditorium where keepers provide educational talks for members of the public. The two areas are separated by armoured glass. The 12 x 6 metre hall is equipped with ropes and logs giving the chimps access to almost all of the area, including the full 6 metre ceiling height. This has, in effect, created an indoor gymnasium for the animals.
Nick Jackson said: “Our commitment to replicating the most natural environment possible for the chimps explains why natural daylight was so important to the project.”
It also explains why windows were considered impractical for a number of reasons, not least because chimps are extremely powerful, dexterous and intelligent animals that could cause real problems for traditional windows. In addition, windows large enough to introduce sufficient natural daylight would severely reduce useable space; traditional windows would need to be covered with wire mesh; and windows with armoured glass were too expensive.
Fortunately, the solution was provided by the project’s contractor Anwyl Construction Company, which suggested Monodraught SunPipes. Not only would they flood the hall with natural daylight, but they would also cause a minimum of disruption as a new ceiling was being installed as part of the refurbishment.
Nick says: “What made the SunPipes particularly attractive for the Chimpanzee House was their ability to introduce so much natural light so economically, whilst providing maximum exercise space for the chimps by giving them access to all the whole wall area.
“Even though we weren’t familiar with SunPipes before the refurbishment they certainly exceeded our expectations in terms of the amount of light they brought into the Hall. We really were astonished by what we achieved with only two SunPipes. They are so effective that visitors often think they are powerful electric light fittings.”
For safety reasons the two translucent ceiling diffusers, which require no maintenance, are strategically placed to make them totally inaccessible to the chimps.
Nick Jackson believes that the SunPipes have also provided significant welfare benefits for the animals. As well as giving the chimps access to areas of the hall that wouldn’t have been available if windows had been fitted, the zoo is no longer reliant on time-switch lighting to simulate natural daylight. He reports that the change from artificial light to natural daylight has certainly had a beneficial affect on the chimps’ behaviour, particularly the natural light cycles in summer when daylight comes into the hall earlier and lasts longer.
Besides their proven contribution to animal welfare, SunPipe natural lighting systems are also a most innovative solution to the problem of growing energy consumption, since they eliminate the need to use electric lighting during daylight hours. With government committed to reducing energy consumption and CO2 emissions by 20% over the next five years, and the cost of electricity expected to increase by up to 20%, it’s no surprise that natural and sustainable alternatives such as SunPipes have been specified by the Welsh Mountain Zoo as an alternative to electric lighting.